A small plane making an emergency landing on a Florida beach on Sunday afternoon killed two people, one of them a 9-year-old girl, authorities confirmed on Tuesday. 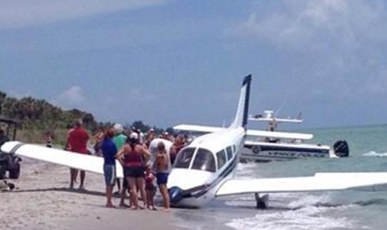 Ommy Irizarry, an Army sergeant, was walking on the beach when the plane crashed. Orizarry, 36, was killed, while his daughter Oceana Irizzary, 9, was critically injured. She was airlifted to a hospital in St. Petersburg, about 60 miles north of the beach.

On Tuesday, the sheriff’s office confirmed that Oceana died from her injuries.

The pilot of the plane, Karl Kokomoor, and the passenger, David Theen, were not injured, police said. The pilot said in an apology read by his family minister that he did not realize there were people on the beach and did not see them.

This is actually the latest casualty incident involving a small plane crash-landing to occur in recent weeks. A small plane making an emergency landing on a Nevada highway hit a truck over the weekend, injuring the people on the plane and in the truck. Last week, a pilot was killed when his plane crashed in the water in southern Miami-Dade, Fla.

© 2014 all rights reserved
Posted by Unknown