Rally the MINI Troops: In Support of Operation Open Arms 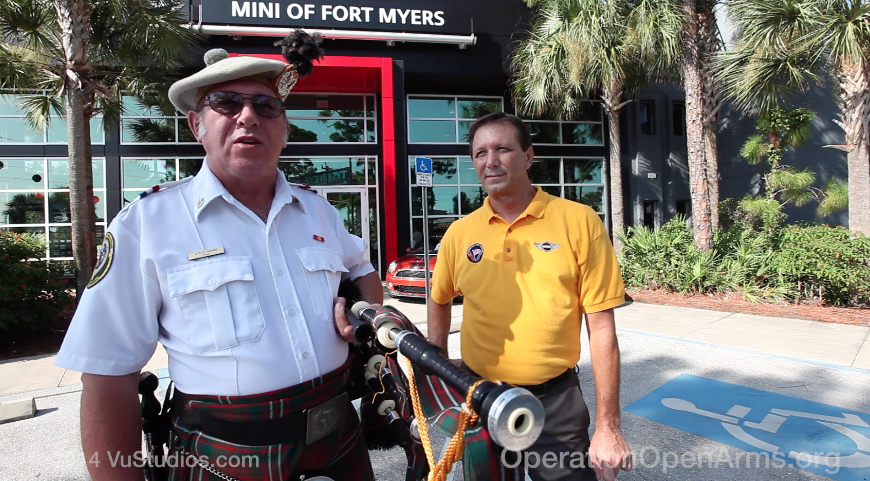 Saturday, August 23rd, 2014 proved to be a very prolific and humbling day for MINI of Fort Myers, Operation Open Arms, and the Southwest Florida community as a whole. On this day, MINI of Fort Myers hosted what is now considered to be the largest MINI Cooper rally that Southwest Florida has ever seen. MINI enthusiasts, along with Harley Davidson riders, rallied together on behalf of the amazing Southwest Florida based military outreach program, Operation Open Arms. This organization is a nationally acclaimed charity which has managed to offer over $11.4 million in free benefits to our military veterans since 2005, out of only $125 thousand raised. The benefits provided for military veterans vary from complimentary fishing charters, pro bono treatment programs for victims of Post-Traumatic Stress Disorder, and even wedding ceremonies that are planned and hosted at no cost.

This rally, which travelled 12.6 miles total, boasted 153 MINI Coopers, 100 Harley Davidson motorcycles, and a total of at least 500 participants and sponsors. Beginning at the MINI of Fort Myers dealership, the convoy of MINIs and Harleys, which were escorted and directed by the Lee County Sheriff’s Office, drove down US 41, took a left on Colonial Blvd, and drove over the Veteran’s Parkway bridge to the Iwo Jima War Memorial in Cape Coral, Florida. Here, Operation Open Arms founder, Captain John “Giddyup” Bunch, said a few words about the organization and all of its incredible accomplishments thus far. He was joined by Florida State Senator Lizbeth Benacquisto, Cape Coral Mayor Marni Sawicki, and others who had some wonderful words to share. The MINI Troops were also joined at the Memorial presentation by the presence a Lee County Bagpipe band, which performed beautifully, military personnel, as well as a military color guard demonstration.

After leaving the Memorial, the parade’s final stop was at the Tilted Kilt in Fort Myers. Here, a silent auction took place, along with tents selling merchandise from approximately 80 different local vendors and sponsors. 100% of the proceeds went toward funding for Operation Open Arms, so that they can continue to support the amazing men and women who risk their lives for our beloved country. A live performance by the U.S. Stones, a Florida-based Rolling Stones cover band, emanated in the background while the silent auction was taking place. The Tilted Kilt raffled off a giveaway of a two year lease on a 2014 MINI Cooper Hardtop. Poetically, the lucky winner of this car was female servicewoman who had recently retired from the military.

The day could not have ended on a sweeter note. When all was said and done, nearly $30,000 was raised for the cause. Rallies have grown to be quite a significant part of the MINI Culture, and further facilitate a sense of comradery amongst MINI Owners. MINI of Fort Myers was very excited to assist such a revered organization, and were humbled by the experience, which had a tremendous end result. The dealership is very grateful for all of the support that was received. The MINI Troops successfully rallied once again for such a fun and heartfelt event!