There is only one Ruben Celiberti! - World Class Singer, Musician, Dancer and Choreographer - Video Marketing Services

There is only one Ruben Celiberti! - World Class Singer, Musician, Dancer and Choreographer - Video Marketing Services

There is only one Ruben Celiberti!   This multi-talented entertainer is a world-class ballet dancer, singer, musician, and choreographer who has performed with the leading stars of theater, ballet, and television in Europe and Latin America.

Considered a star of the dance of international value (in 1996 he was awarded the "Critics Award" as the best performer in South America ), she studied dance, piano and singing at the Institute of the Teatro Colón of Buenos Aires , then perfecting his studies in Paris. 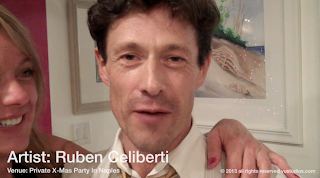 He has been a member since 1984 of the Society of Attilio Labis and, the following year, the National Ballet of Marseille directed by Roland Petit.

In his repertoire includes performances by directors and choreographers such as Lindsay Kemp, with whom he worked in 1989, Vittorio Biagi (same year) and Micha van Hoecke (in 1995).

In Italy - where he spends part of the year - has toured major theaters also participating in musicals and dance festival (in particular two dances typical of Argentina, the tango and milonga ).

In particular, he starred in 1992 's La Dame aux Camelias, directed by Giuseppe Patroni Griffi , and - two years later - in An American in Paris, starring along with Raffaele Paganini and Rossana Casale.

For the television Italian appeared for the first time on the small screen in 1988 as a showman in the spectacle of Raiuno Good luck.

As a choreographer, he debuted in 1992 with his Amor y Tango, a work that combines dance and song and performer who has been the protagonist.

This work was followed in 1996 A pure talent and again, in 1998 , Pasiones, the play with which he made ​​his debut in Buenos Aires.

In 2008 he edited for the Ballet of Milan and the dancer Raffaele Paganini, the director of the play Amor de Tango, articulated with music by Astor Piazzolla and Carlos Gardel.

“I can’t recall ever having seen in the theater a performer gifted with such exceptional talent!”
Roberto Quirno – Cronica

“Ruben Celiberti passionately explores distinct art forms, which he masters with perfection!  This performer proposes a lively cocktail of music, dance, and song that touches every genre: from popular music to powerful classical themes.  His stage presence is boosted by an artistry of the highest caliber and his ability to communicate with audiences of every age.”
El Cronista

“The secret lies in his dazzling personality, which charges his versatile artistry with an energy that doesn’t let up!”
Rafael Granado – Clarin

“His show presents a collage of musical themes: from Weil to Piazzolla, to timeless Neapolitan, French, American, and Argentinean songs.  Celiberti dances brilliantly to the music of Handel and follows with segments drawn from his experience with the Moscow Circus.”
La Capital

“Celiberti performs all forms of dance and he does so exceptionally well.  He’s gifted with a beautiful tenor voice, he plays piano, he even roller-skates!  An authentic artistic genius.”
La Capital

This Video was sponsored in part by Vu Studios